We have been holding a monthly Taizé service for several years and during lockdown we are moving it online. You will be able to access all our monthly online Taize Services through this page.

What and where is Taizé?

Taizé is a small village in Burgundy, near Cluny, in south eastern France.

It was to this small village in 1940 that Roger Schultz went looking for a house to rent. At 25, he was a newly ordained pastor. He had grown up in Switzerland in an ecumenical family; his father was a Protestant pastor, his maternal grandmother was catholic. He felt that God was calling him away from the safety of Switzerland to a life in communion with people who were struggling in occupied France.  He was joined by a few friends and together they got involved with the underground movement moving people to safety; visiting prisoners in the nearby POW Camp. They became known to the SS and for a while had to flee back to Switzerland.

They returned in 1945 and started to live their life by faith in joy, simplicity and sharing, according to the Beatitudes. They continued to visit the POW camp where the prisoners were now the German SS guards. The impact on these German guards as they were treated by Br Roger and his friends in exactly the same way as they had seen them treat the French prisoners caused many to come to Christ. After they were repatriated they returned to visit Br Roger, bringing friends. They helped repair the damage that the SS had done.

Since then, Taizé  has been the home of an ecumenical Christian monastic community made up of brothers from different countries and different denominations (Protestant Lutherans, Baptists and Anglicans; Catholics; Greek and Russian Orthodox).

The brothers live and share a simple life of work and prayer and support themselves financially, through their own skills and labour.

Each and every week, throughout the year, they are joined by thousands of visitors, mainly young people, who come from all over the world to spend a short time with the community. The charge for full board is adjusted to reflect the economic strength of their home countries, but the young people pay only what they can afford.

If you visit you will meet with people from up to 70 to 80 countries, from every denomination of Christianity, from all five continents.

The community has developed a unique style of Bible-based teaching, with daily multi-lingual study sessions, led by one of the brothers, followed by a group reflection. Each day, there are three services of worship, before breakfast (Eucharist), before lunch and after dinner. It is wonderful to see so many young people choosing to attend church and engage with God so deeply. Many worshippers stay on after the evening service, to carry on singing, praying or reflecting on their spiritual growth and journey.

2nd October 2020
“ The stone rejected by the builders has become the cornerstone” In the service below, songs are embedded as links. When you click the song links,…
Read More

4th September 2020
Jesus, the risen one, when we stay in your presence, we understand that the Gospel calls us to give our life. And you say to…
Read More

31st July 2020
Dominie Burton writes, “During this time of lockdown the Taizé Brothers have put a number of resources on their website and also on their own…
Read More

30th July 2020
If you’re looking for something that’s both fun and will help your family grow in faith this summer, then This Taizé are offering special online…
Read More 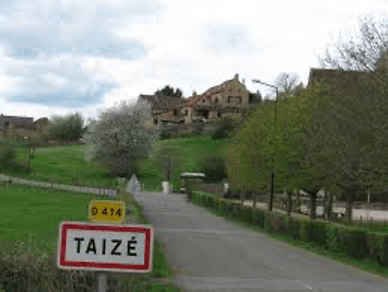 5th July 2020
Dominie Burton writes: “I first went to Taizé in 1974, not knowing anything about it. Thinking I was a Christian when I went I was…
Read More

5th July 2020
In Cumnor, many of us have been meeting on the first Sunday evening of each month. During the lockdown, our Taizé ‘regulars’ have been invited…
Read More